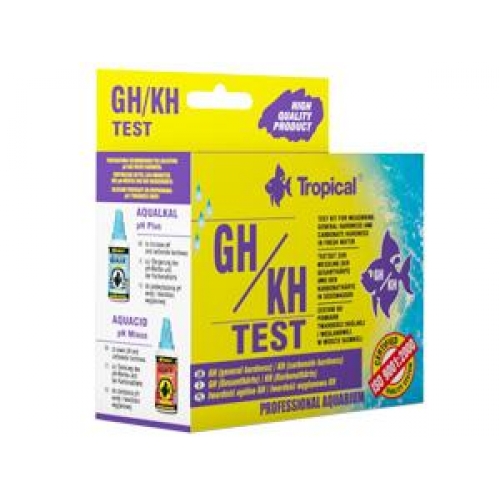 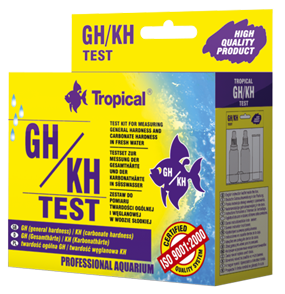 TROPICAL GH/KH TEST is used to measure the general and carbonate hardness of fresh water in the range 0-30°dGH and °dKH, respectively.

What are general and carbonate hardness?

Carbonate hardness (KH) is a measure of the concentration of calcium and magnesium ions present in combination with hydroxide (), carbonate (CO32-), and bicarbonate (HCO3-) ions, while non-carbonate hardness (NKH) is a measure of the calcium and magnesium ions present in combination with sulphate (SO42-), chloride (Cl-) and nitrate (NO3-) ions. When measuring the carbonate hardness (KH) of the water using TROPICAL GH/KH TEST, the most often, it is lower than the general hardness (GH), which results from the formula given above. Moreover, in such water the KH level is equal to the alkalinity, which is a significant water parameter, responsible for its stable reaction (pH). In one case it may happen that TROPICAL GH/KH TEST will indicate the carbonate hardness (KH) as higher than the general hardness (GH). Such a measurement results from increased level of sodium and potassium carbonates and bicarbonates. The results of such analysis should be interpreted in the following way: the level shown by GH test is equal to general hardness and, in the same time, to carbonate hardness, while the level shown by KH test means alkalinity.

Why is it necessary to monitor the general and carbonate hardness of water?

Many fish species are characterised by wide hardness tolerance. However, in some species the correct level of hardness is important for good health and reproductive success. An equally important factor is the close relationship between carbonate hardness (alkalinity) and pH. The higher the carbonate hardness (KH), the more stable the water reaction, which prevents the pH decrease, resulting from the biochemical processes in the aquarium. Unfortunately this positive feature of KH cannot be utilised when breeding fish that require very acid water, as it prevents adequate lowering of the pH.

What units are used to denote general and carbonate hardness?

Water hardness can be expressed in different units. German degrees (°dGH/°dKH) are the most popular in the aquarium literature. Using the table below it is easy to express KH and GH in any unit.

Degrees of hardness and conversion factors.

3.   Hold the bottle with the reagent vertically above the phial and, gently squeezing the bottle, add the reagent drop by drop directly to the water. Shake the phial gently after adding each drop, until the sample assumes a uniform colour. One drop represents one German degree. Continue adding reagent, a drop at a time, until the colour of the sample changes:

from red to green when measuring GH

from violet to yellow when measuring KH

4.   After the test is completed, rinse the phial thoroughly under running water.